Marlins owner Jeffrey Loria took out ads in three major south Florida newspapers and wrote a “Letter to our fans.”

Loria took out the ad because he had “sat quietly” for long enough and wanted a chance to respond to his fans about the Marlins losing season and their offseason that included a trade to the Toronto Blue Jays of almost all of the team’s highly-paid star players.

To understand the full villainy of Jeffrey Loria, we have to go back in time and realize what kind of a man this is. This is a man that wants to profit from the game of baseball above all else. He feels no duty to his fans and no duty to put a winning baseball team on the field. 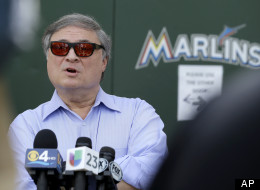 Loria managed to go from a small stake in the Montreal Expos to convincing Major League Baseball to bring back the Nationals in exchange for ownership of a new team in Florida. He then managed to convince taxpayers to build him a new stadium (with some questionable art choices). Loria has done all this because he is smart and because he knows how to use sports to take advantage of people.

Taxpayers are still on the hook for over $600 million of the Marlins new stadium-which checks in as the most expensive of all time-but Loria was able to get it built based on promises that the team would dramatically raise their payroll, put out winning teams, and compete for the playoffs every year. And they did, for about half a season.

Jose Reyes, Mark Buehrle, and Heath Bell were the big name free agents signed by the Marlins last offseason. They brought in sparkplug (but World Series winner) Ozzie Guillen and everything looked ready to click. But the season was a disaster, the Marlins went 69-93 and started didn’t even make it a full season before they started to dismantle their team.

Star infielder Hanley Ramirez and reliever Randy Choate were the first to go, off to the Dodgers for a back of the rotation starter. 1st baseman Gaby Sachez was sent to the Pirates. Starter Anibal Sanchez and infielder Omar Infante were sent to the Tigers and Manager Ozzie Guillden was fired (partly for his incendiary comments about Fidel Castro in a town with a large Cuban population). The turning point for the Marlins, though was their blockbuster trade with the Jays. Reyes (a franchise shortstop) and Buehrle (a workhorse starter) were sent off, along with ace Josh Johnson, catcher John Buck, and utilityman Emilio Bonifacio.

In total, the Marlins trade 12 players from their opening day roster. They took a payroll of $146.5 million in 2012 to an expected opening day payroll of $45 million (the lowest in baseball) in 2013.

I’m not here to say trading former stars is never a good idea, but when really evaluating the trades and the returns received, it is obvious that the Marlins were looking to dump salary and nothing more. In the Jays trade the Marlins received several prospects that could see time in the major leagues, but these are not your future Trouts or Strasburgs. They aren’t even future Reyes or Johnsons. In fact, none of the Jays top prospects (Travis d’Arnaud, Aaron Sanchez, Noah Syndergaard, and Anthony Gose) were sent off in the deal. Another highlight is the trade of utilityman Emilio Bonifacio. Bonifacio was set to make around a $2.5 million but could play multiple positions, get on base, and is a threat to lead the league in steals. In short, he is the type of player every GM wants on their team. But it seems that every player making over the minimum is too expensive for the Marlins these days.

Loria writes in his appeal to fans that “experts have credited us from going from the 28th ranked Minor League system…to the 5th…Of the Top 100 Minor Leaguers rated by MLB Network, we have six.” This is Loria’s attempt to justify the trade, but it doesn’t hold up. Of the six top 100 prospects, only two were acquired in trades (Nicolino and Marisnick from the Jays). The top two Marlins prospects are outfielder Christian Yelich and pitcher Jose Fernandez, both of which were draft picks that had nothing to do with the trade. Another top prospect was first round pick Andrew Heaney and finally, Marcell Ozuna was a signing from the Dominican Republic.

According to Forbes, the Marlins have made a combined $196 million in operating profits over the previous six seasons. For two of those years, the team’s financial documents list an expense for a “management fee” to the Double Play Company in the millions. Take a guess at who runs that company? Jeffrey Loria and David Sampson, the team president.

This is as low as it gets. Loria has funneled millions of dollars from his team to his pocket, convinced taxpayers to foot the bill on a new stadium, and refuses to do his job of keeping a winning team on the field. But, hey, now that Frank McCourt is gone, someone needs to assume the role of resident scumbag, right?

I feel like I need to issue a disclaimer before this post. The words that are about to follow we’re difficult to write and hard to justify. But it’s important to say that this post will not attempt to serve as an endorsement of Jeffrey Loria. He is doing his best to demolish a fan base, and, short of having a contest where a fan is selected out of the crowd to start in LF, I’ll be surprised if they fill Opening Day. Instead, I’m going to pitch an idea that attempts to explain the rational behind the recent actions made by the Marlin’s front offices.

The Marlins entered 2012 with a new stadium, a new uniform, and a lineup full of big names. While the lineup was impressive and excitement was at its highest since they won the World Series in 2003, the team started struggling by July. At that point in time, the team had scored the third fewest runs in the game; the team simply wasn’t hitting. A big reason for the offensive struggle resulted from the poor rotation that couldn’t keep them in games. Their starting rotation going into the season was Mark Buehrle, Josh Johnson, Ricky Nolasco, Anibal Sanchez, and Carlos Zambrano. While the Marlins had a rotation of big names, they weren’t performing like it. Plus, none of them could be considered higher than a #3 starter at any point in 2012, and their run differential at mid-season proved it. The Marlins were -66, fourth worst in the league at the end of June.

A month later, Loria apparently had given up on the season, and began restructuring. As they traded Anibal Sanchez and Omar Infante, they opened up space for Bonifacio, and picked up a slew of highly ranked prospects, two of which will be starting this year. They then attempted to fix their pitching situation by trading Hanley Ramirez, to the Dodgers for Nate Eovaldi. Up to this point in the season, Eovaldi was performing well, especially for his age. And with Hanley far from his MVP numbers from 07-09 (he hasn’t posted a WAR above 2.6 since), it seemed like a way to add back rotation depth in the short term (Eovaldi could be considered at best a mid rotation guy in the long term) and free up payroll to land another deal in the off season. These two moves we’re strategic baseball moves that allowed the Marlins to give up some big names that were under performing for improvements in their rotation and at catcher.

Yet as with all prospects, they take time to grow. And in November, Miami decided they couldn’t wait any longer. So they traded their remaining names off to the Blue Jays for a bunch of no names, with the biggest name, Yunel Escobar, getting shipped off two weeks later. It’s at this point it becomes hard to justify Miami’s actions, if only for the minuscule haul of talent that they received in return. (I think more of the blame should be placed on the catatonic commissioner, but that’s for another time). As my colleague points out there are major flaws in Loria’s argument that the Marlins have one of the best farm systems, but when you consider five of the farm system guys they traded for last season were highly touted in 2012 and are now starting, he does have some truth to the argument.

As for the stadium, it appears that the $161 million Loria mentions is a little high, the correct number is closer to $125.2 million or 20%. (Link) Even with that, as Loria states the public funded portion of the stadium will be funded by tourist’s traveling to and from the city. In other words, this tax is least likely to burden the citizens of Miami, which should make it a hit with the taxpaying Marlin fans. The only negative effects they will directly face is a shortage of revenues for other commodities they receive from the city. However, tourist taxes are highly inelastic and likely to be a stable source of revenue, and while there is no doubt that it will cut into Miami earnings, the city can easily just raise the tax a percentage or two to make up the difference without upsetting the citizens of Miami. (Plus, the stadium has won tons of awards, which will look great next to the stadium’s $73,000 bobble head display case…I couldn’t resist).

With this letter, Loria is attempting to offer the City of Miami an olive branch. Is it a first step? Yes. Does it explain everything that happened last year to the Marlins fans? No. But if he wanted to do that, he should have bought the whole Sunday paper; he definitely can afford it.